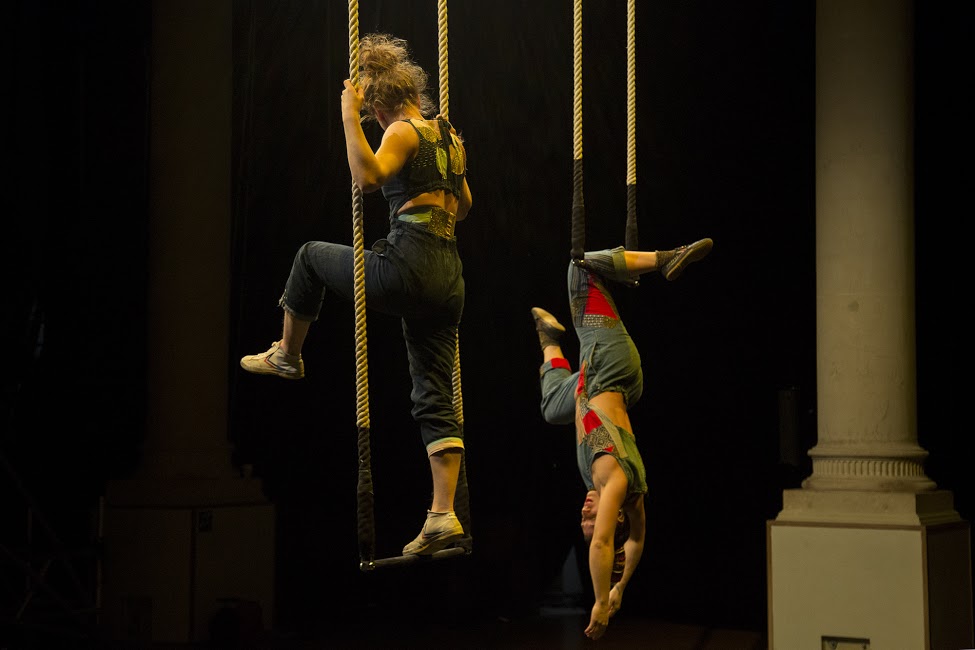 “Betwixt and Between’ debuted on the 24thof February at Circomedia, presented by CirqOn the Seam. The story tells how two women, interpreted by Océane Sunniva Peillet and Alice Watson, learnt how to communicate crossing a linguistic, and cultural, divide. Directed by Gwen Hales, the show used an experimental mix of physical theatre and acrobatic techniques to tell us their story.

CirqOn the Seam is a rising company that investigates the boundaries between disciplines, mixing physical theatre and aerial techniques. Their debut show, “Betwixt and Between”, explored the power of physical communication working around the limits of verbal language.

The story was about two women that met in a world outside of space and time. One being Spanish and the other being French, the only thing we could recognise about them was their different languages. But this time the words could not create a bridge between them to start with; on the contrary, words created a barrier in the understanding, not only for the two characters but also for the public. However, even without understanding the spoken language, the personality of the two women was immediately delineated: the French character, interpreted by Océanne, is loud and a bit clumsy, firm and determinate in her intention while the Spanish character, interpreted by Alice, is carefree, playful, graceful and quite silent.

Their story began around crossed ropes and twinned trapeze bars. When the two-crossed trapezes separated, it became apparent that the ropes were attached to each other via pulleys. And that’s how the relationship between the two women started to develop authentically. Because of the connection between the two trapezes, they had to abandon the verbal communication to play together instead, interacting physically with each other’s movements and forms. 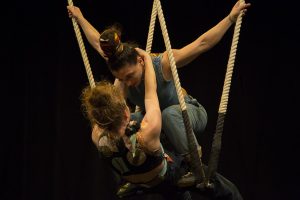 Through these games, also our impression of their relationship evolved throughout the piece, driven by the artistic interpretations of the two performers rather than the technical ability required to use the equipment. It is because of this “childish and playful” approach to the trapeze that the audience came to understand this silent conversation, breaking down the communication barrier created by the language.

I have interviewed Gwen Hales, the director, to find out about their company and their work behind the scenes.

1 – “Betwixt and Between” is your debut show as a company. What is the main interest that brought you to work together? And what are the future projects to further develop the physical research of your company?

I was brought in as a circus director to work with Alice & Oceane after they decided to apply for funding to make a show. They’d been experimenting together for a while before I got involved, and I was intrigued by their ideas. Both were experienced trapeze artists before working together on this new piece of equipment which was 2 trapezes with the ropes attached to each other via pulleys.

PersonalIy, I have spent lots of time working with pulley-based aerial equipment. I find myself fascinated by simple mechanics, and love to investigate how circus bodies can interact with ropes & pulleys to create height and interesting visuals. As a director I like to create as much of a 3D picture as possible.

The equipment itself has it’s own character, and there was no way we could ignore that. We called it “The Beast” because, although quite exciting, it had a habit of pinching fingers and toes, and was quite unpredictable at times. The manner in which the two trapezes are connected means that weight must be balanced – and this lends itself to telling a story about balance. Oceane is slightly heavier than Alice, so there was an inherent inequality to their physical journeys on & around “The Beast”. These inescapable facts led us to playing with the differences between Oceane & Alice, physical differences and emotional differences. The development of the characters emerged slowly, as we explored the nature of “The Beast” further.

3- The two women of your story have learnt how to trust each other and cross their cultural divide only when they abandoned the verbal communication. On the other hand, the latest political developments are slowly bringing us to give more and more importance to our cultural origins and to the differences between us. How would you relate the meaning of your story with the global situation?

We knew the show was about miscommunication and during some of the rehearsal sessions, we talked about the refugee situation. We discussed a situation where you might find yourself in a place where you don’t speak the language or understand the cultural niceties of the land you end up in. Misunderstandings can occur through language, but also through not being able to ‘read’ the culturally-normalised physical actions of another person. For instance, when greeting someone, where you are normally ‘allowed’ to touch each other is different for different cultures – holding hands, touching noses, slapping someone on the shoulder.

I think that through the show, we are saying that acceptance & curiosity are useful tools if we are to understand another’s strangeness.

My own personal take on the current global situation is that problems are made worse when people stop trying to communicate. This is the same for close personal relationships as for nation-leaders.