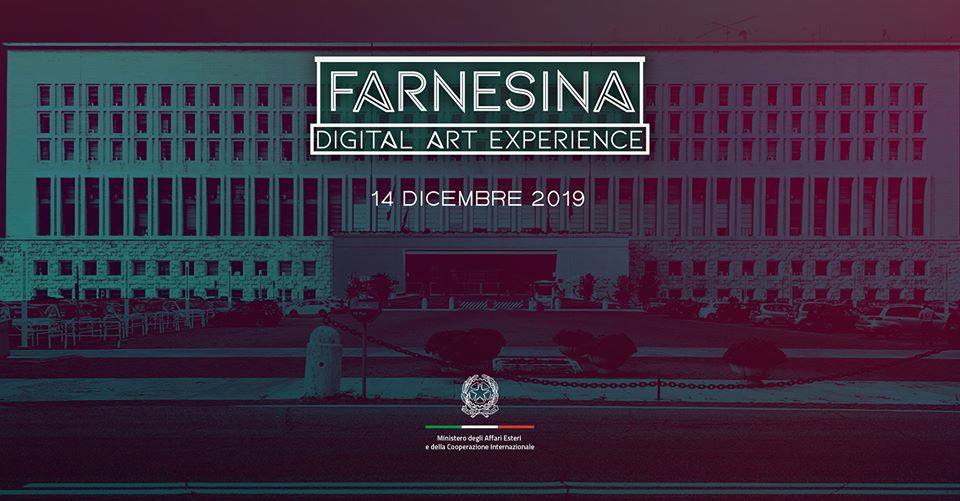 Initially, the imperial palace of Farnesina was meant to be the new Palazzo del Littorio, the main site of the Fascist Party as Benito Mussolini commanded. Already in 1940, the designated use of this imperial building was changed to become the Foreign Affairs Ministry, despite the frequent interruptions due to the war. When in 1959 the architects finalised the building curating any detail, the Foreign Affairs Ministry decided to play with art to highlight the intentions of change compared to its original scope.

Characterised by the contradictions and the beauty of Italian history, when the building became operative after the war,  Farnesina gathers up a variety of contemporary artworks to promote the creativity of Italian artists in the world, becoming one of the most interesting collections of contemporary Italian art. This time, rather than opening its doors, the façade of the palace becomes a huge canvas for 14 studios of video mapping to promote Italian digital artists. In collaboration with Bright Festival, yesterday night the project ‘Farnesina: Digital Art Experience’ surprised the audience with a game of lights, colours and visual tricks transforming and recreating the building.

Apparati Effimeri (Bologna) opens the performance with a Minerva holding the world in her hands, remembering to ‘stay human’ despite where you are in the world. If Antaless Visual Design (Palermo) melts the architecture with a dynamic construction and deconstruction of lights and pixels, Antica Proietteria (Bologna) redesign the building with gold geometric shapes and glitter recalling Italian factory style. FLxER (Rome) begins with tiny particles of lights becoming white lines playing not only with the architecture but also with the history of the place, ending with ‘NO BORDERS’ to remind the importance of being open and connected with other cultures.

Kanaka (Milan) enlightens the window of the building creating a wave effect, while Luca Agagni Studio captures the building with particles of rainbow lights creating new forms. Michele Pusceddu (Cagliari) plays with coloured lights transforming in two women coming together, highlighting the importance of the encounter and dialogue. Monogrid (Florence) gives life to the buildings playing with geometric constructions, and Mou Factory (Cremona) combines the architecture with visual tricks.

OLO Creative Farm (Como) starts with a light ball to take over the building, and OoopStudio (Reggio Emilia) plays with the force of nature which recreates the building remembering the importance of the environment in our life. Pixel Shapes (Ragusa) plays with chemistry to highlight the connection between the tiniest particle and the most remote planet, while WÖA (Milan) highlights the importance of understanding what bytes of data are asking ‘how much inattention can you afford?’. The Fake Factory (Florence) ends the performance transforming the architecture in a waterfall of lights and bricks.

The performance is a contest to select three works that will be presented by Bright Festival 2020, a Florence-based event promoting digital creative explorations since 2018. After the Festival, the artists will be part of a group exhibition travelling in six cities across the world between 2010 and 2021. This performance was not only a moment to promote Italian digital art, but also to create a space of gathering and encounter in one of the most significant places of our history. While we keep forgetting that we are not only made out of our past, this performance remembers us the infinite possibility of this contemporary and messy time – and how we can be part of it by interacting with its changes and evolutions, rather than demystifying the future hiding behind its complexity.