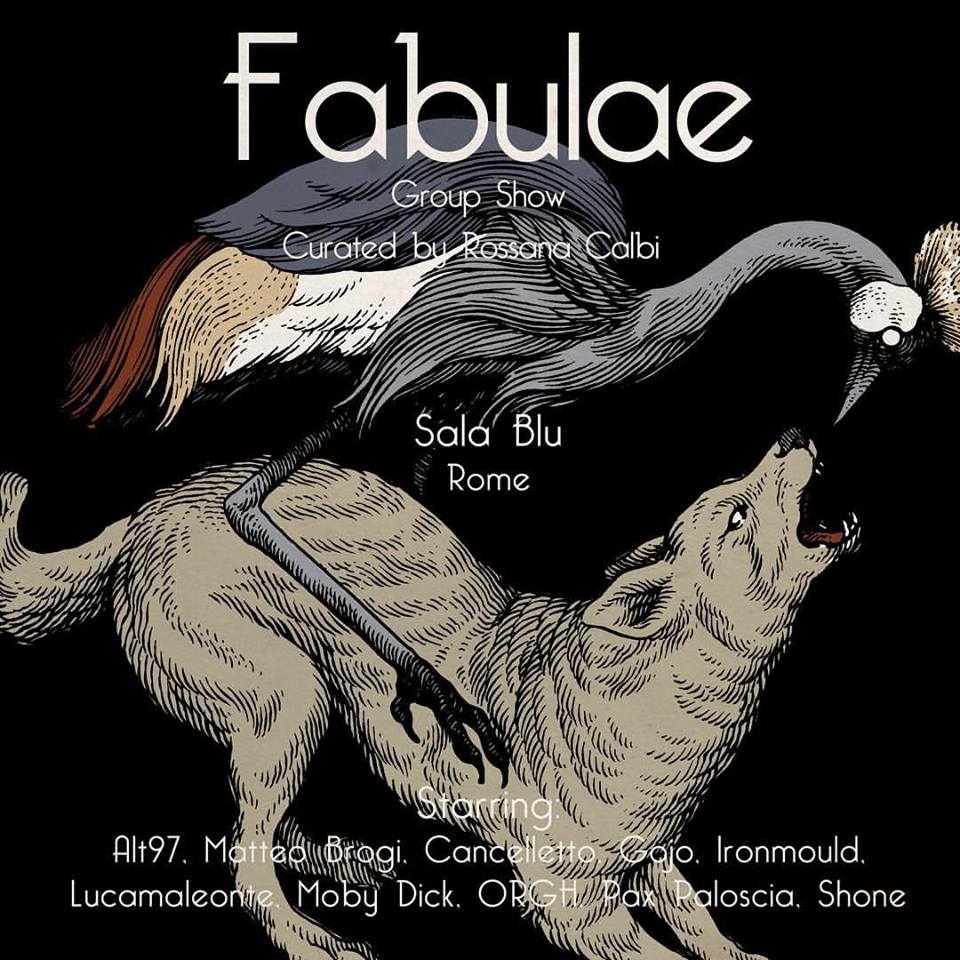 Fabulae is a collective exhibition of 10 street artists inspired by the collection of fables written by the Latin author Phaedrus. Curated by Rossana Calbi, the exhibition will run until the 29thof July at the Sala Blu Gallery in Rome.

Phaedrus was a slave who lived in the ancient Rome during the 1 century A.D. Freed by Emperor Augustus for his literary talent, Phaedrus introduced the genre of fables into Latin literature. As his Greek master Aesop, Phaedrus used exempla with animals to create allegories warning against life’s dangers and describe human behaviour. Observing his time and his socio-political situation, Phaedrus developed his unique vision of life, using the simple vocabulary allowed by fable, to be understood by anyone through a lesson thought a the end of any short story. Linked with the cynical philosophy of Diogenes, the author used animals to illustrate his idea of society, which he saw divided by power games, where dog eats dog, and the weaker, less powerful lower classes that simply had to accept the absence of justice and the fear and resignation that brought with it. Phaedrus translated his vision of reality to illustrate the inevitable corruption of the society, where the hope in justice or mercy completely lacked, even trying to save who is stronger than you in a moment of need. Strong examples of this idea are The man and the adder, work presented by Alt97, or The wolf and Crane, presented in a medieval style of painting by Lucamaleonte, where helping the evils means death instead of reward.

The intent of these lessons, however, has never been to inspire a revolution in those oppressed lower classes, but to teach one to see the world with eyes anew, so that one might learn and inspire personal change. According to this idea, 10 street artists have been challenged by Rossana Calbi to give a contemporary interpretation of the lessons thought at the end of the short stories borrowed from our childhood imagination. The artists reshaped the moral core of Phaedrus’ work, respecting the variety of the themes with the variety of their style and background. The 10 artworks on canvas shown by the artists match and echo Phaedrus’ lessons, giving us the chance to reflect on dynamics still current in our society from a different angle. For example, The proud frog, reshaped by Iron Mould with an abstract and fragmentary style of painting, reminds us the waste effort we use to appear like someone else rather than improve our self; or The dog an the wolf, drawn by Matteo Brogi, who painted the character a strong human expression, makes us question on the price of freedom compared with a life of comfort; while The battle of the mice and weasels, that ORGH painted with a style that reminds us a child cartoon, touches the dilemma on the role of our commanders, a thematic issues which still bears cultural significance and saliency. 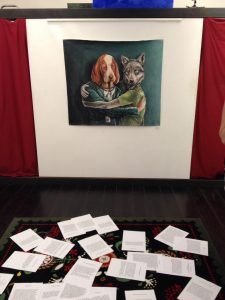 It is impressive how these stories coming from a time so far from us have still the power of making us question our society, overall if translated in a form of art so connected with our own society. The lessons though by Phaedrus never expected a revolution, but the intent was finding a universal key to talk to anyone was living in that society. The universal language of the street art gave us another opportunity to question and observe our contemporary time starting from stories that belong to our past. Once again, art may be the key to seeing our world with new eyes, from a new view not resigned to believe that our actions bear little consequence upon the world we inhabit. In the end, as Phaedrus said in The wasp and the butterfly, brilliantly recapped by Shone, “It does no matter what we used to be: the important thing is what we are now!”.